Some information
about Chania...

Chania is the second largest town in Crete (54,000 inhabitants) and unquestionably the one which has preserved more of its old character than any other. Around Kasteli and the harbour, many buildings and even entire neighbor hoods from the Venetian and Turkish periods have been preserved in good condition. The new part has been built according to a modern plan with wide streets, parks and fine buildings. Eleftherios Venizelos is particularly honoured here he was born in the village of Mournies near Chania and is buried outside the town, at Akrotiri.

Several direct charter flights arrive here in the summer months. Chania is the starting point for a visit to western Crete, which does not have the wealth of archaeological sites of central and eastern Crete but is unequaled in natural beauty. Connected by air with Athens (West Air Terminal) by four flights a day, Chania international airport (14 km. from the town centre) is at Akrotiri.

Chania has also daily ferry boat connections to Piraeus from the harbour at Souda. The departure from Piraeus is late in the afternoon, arriving at Souda in the morning where local buses take the travellers to the centre of the town in front of the Public Market.

In the town and environs of Chania are many hotels of all categories, a youth hostel as well as many restaurants and tavernas in the centre, particularly at the harbour where there is a good deal of evening activity in the summer. The closest beach is at Nea Chora (20 minutes on foot but there is also a bus from 1866 Square for Kalamaki or Galatas). Other beautiful beaches relatively close are on the road to Kisamos. 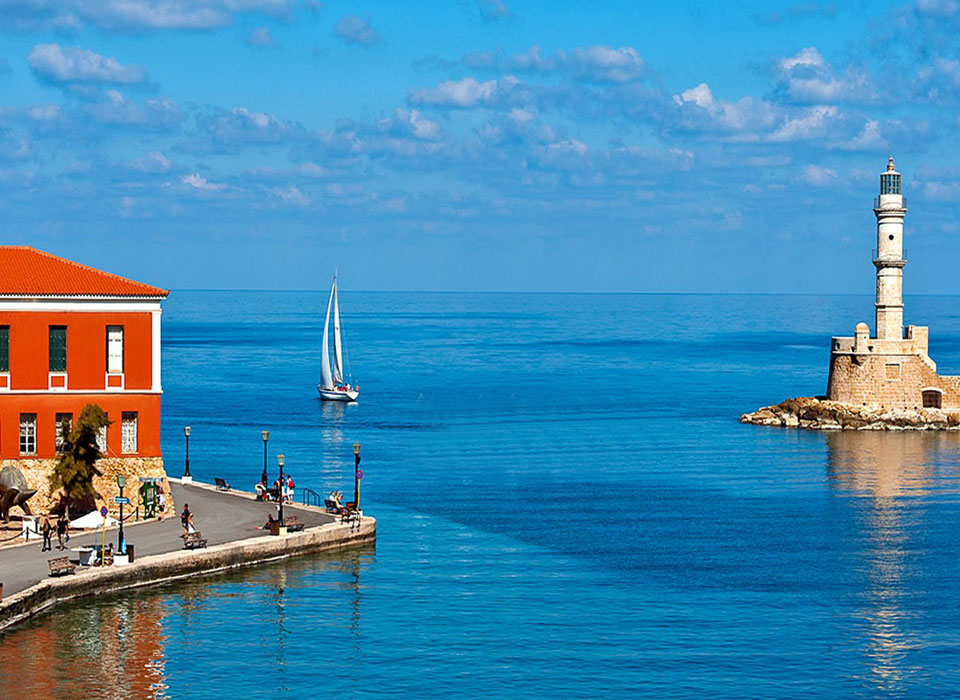 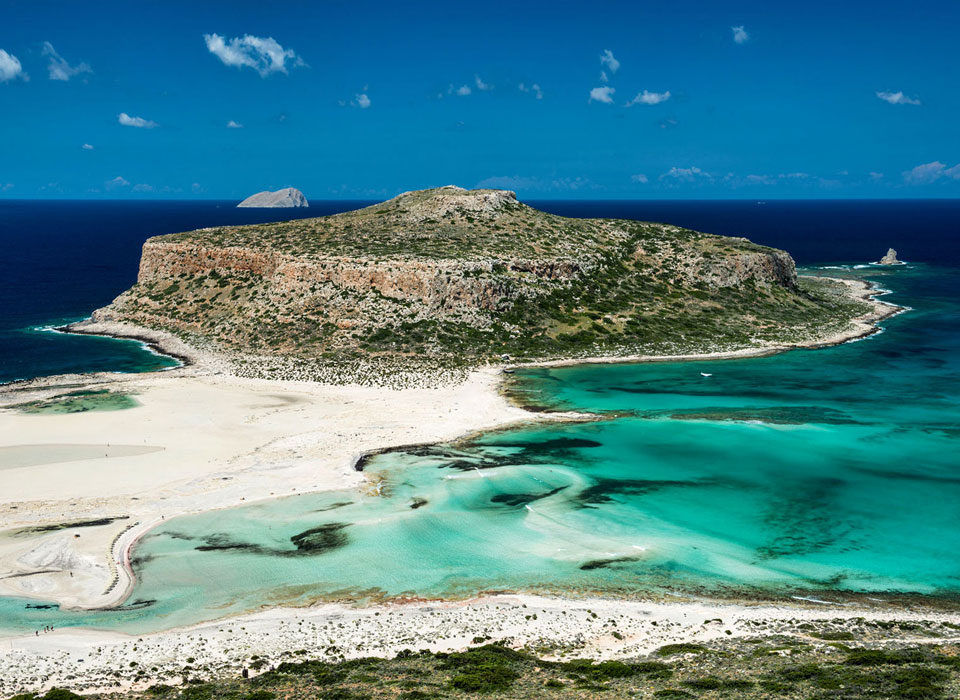 Chania is a magical paradise for every visitor all year round... We challenge you come and find out... We will take care of your stay...

Chania is connected to Rethymnon, Iraklion and the provincial centres of western Crete by frequent bus service. Visits to the sites of the prefecture and the archaeological sites of Crete are organized by travel agencies.

The celebration of the anniversary of the Battle of Crete is held during the last week in May and is the high point of the year in Chania. The day of the anniversary is a holiday and is honoured with a Mass, parades and folk festivals. A host of people from all over the island gather at Chania for this week celebration. Recently these activities have been periodically held at various other centres of the prefecture.

The town of Chania is built, according to archaeological searches, on the ruins of a big ancient town. The up today evidence leads us to the ancient Kydonia which according to Diodoros Sikeliotes, was founded by Minoa and was one of the three big towns of Crete. Its name is read KY-DO-NIJA on a Knossos tablet of Linear B Scripture.

The Kasteli hill, east of the port, owing to the fact that it was adjacent to the sea, made an ideal position for prehistorical settlements. Architectural remains that have survived and belonged to big buildings start at the early minoan period (1900-2200 B.C.). The settlements developed and evolved into an important centre in the first middle-minoan period (2200-1580 B.C.) whereupon a minoan colony was founded, which extends beyond the Kastelli Hill. In 1450 B.C. it is destroyed by a big fire. With the Greek-Swedish excavations, which began in 1967, buildings of this period with many rooms were found, several with floors paved with flagstones, with second storey and monumental entrances that look out on narrow streets. About 100 clay tablets with symbols of the Minoan Linear A Scripture, which have been found, indicate possible existence of a palace.

After the catastrophe of 1450 B.C. the town is rebuilt and continues to exist until the end of the Minoan years (1100 B.C.) with intermittent minor catastrophes. In the post-minoan III period (1400-1100 B.C.) the town reaches very high prosperity. Its products are recognised at Knossos in Eastern Crete, in Thera, even in Cyprus. Its cemetery expands considerably round the settlement. Grave jars, subterranean vaulted graves carved in rock are discovered daily on the eastern, northeastern section of today’s town.

During the first centuries of the 1st millenium e.e., in the geometric and archaic years, architectural remains are not still located, but only abundant ceramics, something which indicates that the town continued its life even during that period. Part of frieze, which is in the museum of Chania and depicts the facade of a temple with the statue of the Goddess in its interior surrounded by archers. Very few finds suggest the existence of the town during the classical period (Sth-4th century B.C.) However this period must have been an era of prosperity for the area according to the testimonies of ancient writers. The famous sculptor Krissilas, Phidias’ pupil, came from Kydonia of the classical period. As far as the Hellenistic period is concerned (end of 4th century B.C.-69 B.C.) there is enough evidence about the flourishing of the town. Houses with mosaic floor have been found in several parts of the town, which during that period had expanded also beyond the hill of Kastelli.

Remarkable graves with rich finds survive during this period. In 69 B.C. the Romans declared war against Kydonia and sent Consul Cointus Concillius Metellus to seize it. The people of Kydonia, under the leadership of Lasthenes and Pavares, fought heroically the Romans, but eventually they were defeated. The town continued its life and flourished during the Roman period. The town of Kydonia continued to flourish and in the early Byzantine period 324-823 A.D. Christianity is spread from the 1st century and Kydonia is chosen as seat of Bishop and is often mentioned in Records of Councils and Ecclesiastical “Minutes” untill the 9th century A.D.

As from this period we have very few archaeological indications, which are confined to a few tomb incriptions from the church of St John and from the area of today’s orphanage, which seemed that they were extended cemeteries of the town. The period 821-961 A.D. is a dark period for Kydonia. It falls into the hands of Arabs following a siege. Historical sources of this period are not very clear and the archaeological indications have not at all been located.

From the Legend (biography of Saints) of St Nicholas the Confessor (abbot of the monastery Stoudiou and wellknown apologist of icons) who came from Kydonia, we learn that his country was rich and prosperous with indelible the memory of its glorious past. The events of the Arab attack are described in dark colours. The Arabs are ousted by the Byzantines in 961 A.D., but the town maintains its strategic significance.

The Byzantines build a fortress, which in many parts treads on the ancient walls, with the building materials of ancient Kydonia. The town however begins to decline. From this period only a few parts of the walls in Kastelli survive. In the first half of the 13th century the Venetians endeavour to establish their sovereignty in the area of Chania. After the siege of Constantinople by the Latins (1204 A.D.) Crete is ceded to Bonifatio Marques Momferato from whom the Venetians bought the island. Bonifatio did not have time to seize Crete before its sale to the Venetians, because the Genovian Count of Malta Erico Piscatori rushed and seized Chania and fortified the Acropolis of Kydonia. After its purchase by the Venetians, the latter characterized Piscatori as pirate and after a tenacious war they expelled him from the island. The possession, however, of the island by the Venetians did not occur immediately, but after hard fights against the indigenous population, particularly in the borough of Chania. The borough of Chania is divided into 90 “Cavaleries”, which are given to the Venetian colonists with the specific obligation to rebuilt the town of Chania. It is they who repair the walls of Kastelli and organize the planning of the town within its boundaries.

The public buildings develop along the central road Corso (Today’s Kanevaro Street) which crosses Kastelli. Chania develop into the second town of the “Kingdom of Crete” and is the seat of Rector and latin Bishop. The town and its port are the centre of a wealthy agricultural area with economical and political connections with Venice.

In the middle of 16th century the town is fortified once more, an operation based on designs by the Veronese mechanic Michele Sammichelli with contemporary walls and trench. The fortification is enhanced with fortresses on the islets Thodorou, Souda and Gramboussa. Within the new boundaries develops the new town- planning network, which survives today.

Big public buildings are erected temples, storerooms, shipyards, a lot of which are maintained till today. The arhcitectural character of Chania is strongly Western with predominant the element of Venetian manierism and some Flemish influences. Quite a few of the buildings of that period are maintained with many subsequent alterations.

In August 1645 the Turks seize Chania and the town is appointed as the seat of the Turkish Pasha, while an Orthodox Bishop of Kydonia is settled in, with the temple of St Anargiri as centre. The Catholic churches are turned into mosques and some new ones are built too. The conquerors are strongly influenced by the local architectural tradition to which they come to add only certain functional and artistic elements. The town develops on the same network, while the buildings assume some oriental character (wooden kiosks, wooden walls, tile roofs, latticed windows, wide range of colours and cavities).

In 1821 before the start of the revolution, the population of Chania came to 10.600 inhabitants. From them 8.000 were Turks and 2.600 Christians, while in 1881, last official census of the inhabitants of Crete during the Turkish domination, Chania had 13.812 inhabitants. From them 9.469 were Turks, 3.477 Christian Orthodox, 159 Catholics, 5 Protestants, 4 Armenians and 485 Jews. The town of Chania was divided into 9 neighbourhoods, which constituted equal in number election sessions. The neighbourhood of Topana, of Yousouf Pasha, of Arab Tzamissi of Kastelli or Moussa Pasha, of Agha Djejire Kalou, Houghiar Tzamissi (Splantzia) Koum-Kapissi and Topalti. Since the siege of Chania (1645) until 1830 Crete was governed by three Pashas, whose headquarters were in Chania, Rethymnon and Iraklion.

In the middle of the 19th century Chania became the headquarter of Administration and with the revolution of 1847, capital of the autonomous Cretan State. The town assumes multinational character with the presence of Foreign Leagues something that had consequences on the economical, social and cultural life. The architectural style changes according to the models of the West and houses and mansions are built inside the walls as well as outside on the outskirts of the town.

A creative drive spreads from Chania to the whole of Crete, laying the foundations of order, security and prosperity. A clamorous crowd of Turkish Cretans, Orthodox indigenous Cretans, Beduins, Jews and Europeans gave Chania a special colour. The Cretan people however never stopped wishing and fighting for the unification of Crete with Greece.

The yearning dream came true on the 1st December 1913 in the presence of King Constantine and the leader of the revolution of Therisso (1905) Eleftherios Venizelos. During the Second World War violent battles took place on the outskirts of the town till the final fall of Chania, after a siege of 10 days. Chania was bombed and the result was the complete destruction of the old town to. During the years of the occupation strong resistance was organized against the conquerors, which classified Chania as one of the foremost towns in Greece of organized resistance.